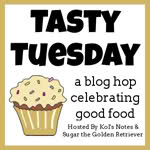 Have you enjoyed the Channukah Crawl as much as we have?  Boy oh boy, every post is so informative, interesting and uplifting.  Bet you’re not surprised that we selected to post on Tasty Tuesday!  Have to keep the cred as Mom’s Kitchen K9s you know.  Visit Meandering Moodys for another super Hannukah post.  Head over to Pumpkinpuddy and Spike the Cat tomorrow for more Hannukah celebrations.

We’re sending you to our feline pals Ateret, Livia and Abbi who posted the historical background of Hannukah so beautifully, including the detailed version of why we make latkes or potato pancakes.  (Speed version: the oil was expected to last one night and lasted eight, so, culturally, potato pancakes and donuts are featured.)

Health concerns have entered the picture over the years, so, now, you can find baked latke recipes in place of fried.  Foodies, chefs and creative cooks have put their spin on ingredients, so, now, you can find: sweet potato latkes, parsnip latkes, spaghetti squash latkes, celery root latkes, beet and carrot latkes, zucchini latkes and Lassie Latkes*! (click here to see the varieties offered at this year’s Latke Festival.)

Since traditional potato latkes contain onions, Mom knew she would make onion free sweet potato latkes.  Knowing that we enjoy parsnips, too, she thought she would search for a combo recipe.  When she found one that also included a chunky applesauce component, she printed and headed for the grocery store! (fever and all… gotta love Mom!)  Mom will share the recipe below, post photos on her Kitchen Counselor Facebook tomorrow with step-by-step pics and show you the experience from our eyes below.

For the Chunky 5-spice Applesauce:

For the applesauce: In a large saucepan over medium heat, combine the apples, lemon juice, apple cider,lemon zest, 5-spice powder and sugar and stir to mix well. Cook for 10 to 15 minutes until apples begin to break down, but are still chunky. Remove from heat and cool.

For the latkes: On a box grater, grate the sweet potatoes and the parsnips. Combine potatoes and parsnip in a large bowl. Season with salt and toss to combine. Add flour and stir to distribute evenly. Add eggs and stir well. In a large saute pan over medium heat, heat 2 tablespoons of the oil (Mom used about 1/4 inch in her cast iron pan). Form the potato mixture into 3-inch latkes that are about 1/2-inch thick. Add to oil and fry until golden brown on both sides and cooked through, about 4 minutes per side. Remove to a paper-towel lined plate and season with salt. Repeat this procedure with all of the potato/parsnip mixture, adding more oil as necessary.

As my BFF, Savannah, says… click on my pics to bigify!

Among and within Jewish families, there can be a customs debate… do you eat applesauce or sour cream with your latkes?  Mom’s family was STRICTLY an applesauce family, although after asking her Aunt and my  Nana, they could not tell her why.  Mom’s heritage is predominantly (VBP) Lithuanian, although she’s not sure that contributes any insight.  After some research, Mom came up with two thoughts:

We agree and echo all the wishes written by our pals so far and wish to add that Little Miss Festival of Lights, Mom and I hope that all creatures have enough safe food and water to keep them healthy.

69 thoughts on “Tasty Tuesday: Latkes for K9s or Lassie Latkes*”