About two, three years ago, during one of my first few playdates with Samson, the Golden Doodle, his Mom, Denise, looked at me and said, “Jetty, get out of the bushes.”  I wasn’t sure how I felt when I heard Denise sayJetty.  However, Jet likes Denise and each time she called him Jetty, he would saunter over and nuzzle her.  During one of our walks with Mary Ann and Dixie, Mary Ann called me Mr. Handsome.  Ooh I liked that.  Then the floodgates opened.

Mom began to experiment.  She started out slow, she called me Jetty Boy.  If I demonstrated my Scooby Doo detecting skills after a rainshower for example, she would call me Mr. Sniffy.  When she wanted me to come into a room with her, she would call me Jet-a-la.  My “Jetster” nickname appeared one night during a walk with Mary Ann and Dixie, when I showed particular swagger.  Since Mom is a Jersey girl, Mary Ann  called me Jettylicious during a walk once; I remember Mom laughing.   Over the two years Mom contemplated writing this blog, she tried to think of a good title.  On a splendid morning walk, she looked over at me and said, Jetty Spaghetti.  Really Mom, that’s the best you could do?  That name still makes me smile, Jet. Oh, and when I sucker Mom into a belly rub or two or three, she calls me Mr. Belly Boy.

When Mom calls me Boo Boo, I can tell from the tone in her voice she’s happy with me.  She usually says this when it’s time to get ready for bed, or cuddle up on the couch, or get brushed.  My favorite name? Member of the family. 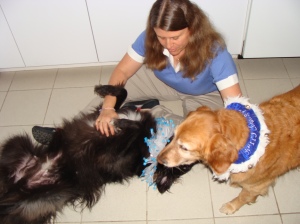